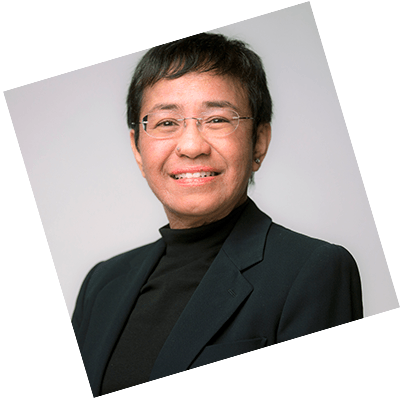 The CEO and Executive Editor of Rappler.com, Maria is one of the founders of the 7-year-old company, which is one of the leading online news organizations in the Philippines.

She has been a journalist in Asia for more than 30 years. She was CNN’s bureau chief in Manila then Jakarta and became CNN’s lead investigative reporter focusing on terrorism in Southeast Asia. She authored two books – Seeds of Terror: An Eyewitness Account of al-Qaeda’s Newest Center of Operations in Southeast Asia and From Bin Laden to Facebook.

Maria speaks to organizations of all kinds on freedom of the press and corporate governance. She is regularly covered in broadcast media such as recent episodes of 60 Minutes and Amanpour & Co. Upcoming in January, Maria is the subject of the documentary, A Thousand Cuts, being featured at film festivals around the world.

Most recently, a Manila court convicted Maria Ressa of cyber libel. The criminal offense requires Maria to pay $7,950 in fines and moral damages as well as serve a jail term of six months to six years. The case arose from an article Rappler published in 2012 about a local businessman’s alleged ties to a former judge, who was later impeached for corruption, and purported links to drug and human trafficking rings.