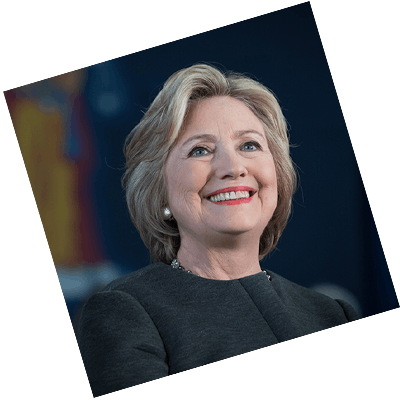 Former US Secretary of State, (VIRTUAL ONLY)

Hillary Rodham Clinton has spent five decades in public service as an advocate, attorney, First Lady, U.S. Senator, U.S. Secretary of State, and presidential candidate.  As 67th U.S. Secretary of State, her "smart power" approach to foreign policy repositioned American diplomacy and development for the 21st century.   Clinton played a central role in restoring America’s standing in the world, reasserting the United States as a Pacific power, imposing crippling sanctions on Iran and North Korea, responding to the Arab Awakening, and negotiating a ceasefire in the Middle East. Earlier, as First Lady and Senator for New York, she travelled to more than 80 countries as a champion of human rights, democracy, and opportunities for women and girls.  She also worked to provide health care to millions of children, create jobs and opportunity, and support first responders who risked their lives at Ground Zero.  In her historic 2016 campaign for President of the United States, Clinton won 66 million votes.  She is the author of nine best-selling books, and host of the podcast You and Me Both.  She is married to former U.S. President Bill Clinton, has one daughter Chelsea, and three grandchildren: Charlotte, Aidan, and Jasper.