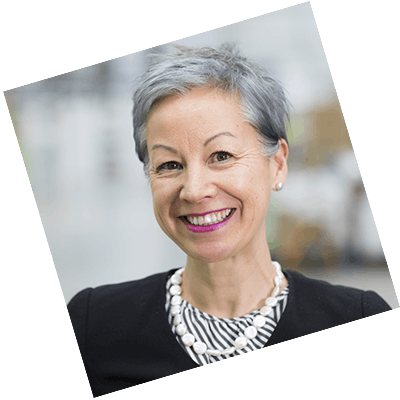 Jacqueline is the President of techUK and the co-chair at the Institute of Coding. She sits as Chair of financial analytics business Metapraxis, is a Non-Executive Director on the board of UK technology business Rightmove plc; on the board of Costain plc, which is committed to solving the nation’s Infrastructure problems. She rebalanced her portfolio towards skills by joining the board of professional services provider FDM Group PLC.

An advisor to fast moving tech businesses and a business mentor at Merryck offering board and executive level coaching. She advises the board of Accelerate-Her and is especially delighted to lend her support to the Girlguiding Association for technology transformation. Passionate about diversity and inclusion which informs where she places her support.

An advocate for diversity and inclusion in all its forms. Passionate about redressing the gender balance and that of minority voices via advisory positions at @accelerate-Her and the @girlguiding association

"If we are to thrive in a digital future, we must ensure that we have all of our voices heard when it comes to designing technology. If we do not, we risk creating a world which is for the few and not for the many."

In 2016 she entered the @Computerweekly Hall of Fame after being voted Computer Weekly's Most Influential Woman in IT 2015; listed on Debretts 2016 500 People of Influence and named in Europe’s Inspiring Fifty most inspiring female role models for 2017. Presented with the 2017 Catherine Variety Award for Science & Technology.

2018 Women in Tech Award for Advocate of the Year acknowledging her contribution to diversity and #IB100 – Most influential BAME leaders in tech. Awarded the Digital & Technology Award at the Asian Women of Achievement Awards 2019. Included in World’s 100 most influential people in digital government 2019.

Woman of the Year awarded by Women in IT Excellence 2019 and 2020 Asian Tech Pioneer. 2021 brings with it recognition for Jacqueline of 50 Most Influential in the Start Up and VC Space along with 46 Most Inspirational Business Women to celebrate International Women’s Day 2021

Listen to her life and music choices on Desert Island Discs podcast March 2019.

Jacqueline was honoured as CBE for Services to International Trade in Technology in the Queen's New Year Honours list 2018.

Happily married to Roger Andrews, they have three children and a grandson. Meditation and yoga is how she finds her balance...