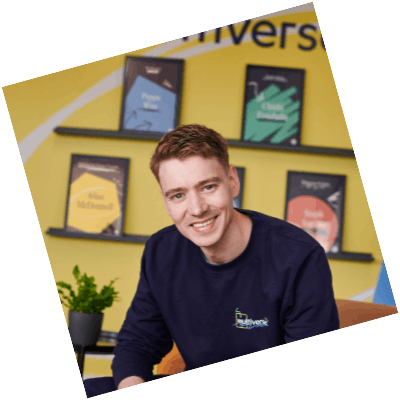 Euan Blair is the Founder & CEO of Multiverse, a tech startup on a mission to create a diverse group of future leaders. Multiverse is building an outstanding alternative to university, and a radically better approach to corporate training. They focus on three primary areas: measuring potential beyond academics to recruit apprentices, delivering world-class job-focused training via applied learning programs, and helping diverse groups of young people build social capital and strong networks through a thriving community both on and offline.

In October 2021, Multiverse secured the largest ever venture raise by a UK EdTech company and, over the past 12 months, has more than doubled the number of apprentices it trains to 5,000.

In Europe Multiverse works with over 300 clients including Facebook, Morgan Stanley, KPMG, Kantar, Citi and Microsoft.  The footprint in the US is rapidly growing, with equally impressive clients as partners.

Prior to founding Multiverse, Euan was the UK CEO of Sarina Russo Group, an employment and training provider with more than 1,500 staff worldwide and a turnover exceeding £100 million. Before that Euan, worked at Morgan Stanley and started his career working for the US Congress House of Rules and Homeland Security Committees in Washing DC.

Euan holds a BA in Ancient History from the University of Bristol and an MA in international Relations from Yale University.  He is a long suffering supporter of Liverpool Football Club.